Writer-director Max Walker-Silverman returned to a central question while writing and filming “A Love Song”: Is the pain of losing someone worth having?

“As I fell in love with some of those around me, they fell out of it in various ways, whether through death, divorce, or all the many ways our lives can be changed,” Walker-Silverman said. told TheWrap.

“A Love Song” follows Faye, a lone traveler who visits a rural campground and awaits a visit from her old flame, Tito, who is going through her own journey through the West.

Fixed by admiration for veteran actor Dale Dickey, Walker-Silverman wrote the film centering on Dickey’s vision as its protagonist. “Imagining her in that role just gave me tremendous confidence to allow the silence of the world to play a part in it, because I knew she had the ability to ground that character and a past and into a reality without having to explain it to the world,” Walker-Silverman said.

When Walker-Silverman wondered, “Who the hell can share a screen with an actor like Dale Dickey?” a short list came together, including Wes Studi, whose casting as Tito gave Walker-Silverman the confidence to “leave as much unsaid as possible and trust [Dickey and Studi] fill the characters with everything [he] wanted from them.

“They are both from quiet places in Tennessee and Oklahoma, respectively. They both loved and lost. They’re that age, I’m not,” Walker-Silverman said. “And I felt good trusting them to do that and solving those problems themselves.”

As Faye and Tito reminisce about their teenage years, their interactions are tinged with melancholy as they express their grief for their widows. As the characters share a childhood and the experience of loss while living a life apart, the film honors “different expressions of love” and loneliness.

Filmed in southwestern Colorado about half an hour from where Walker-Silverman grew up, he recalled crawfish fishing and swimming in the park where the couple met in the film . “It wasn’t hard to imagine these characters’ childhood memories of this place, because I had so many of them,” Walker-Silverman said, “There’s ultimately a story about people like…choosing to be there and choose to pursue beauty even if their relationship with it is uncertain.

Reflecting Walker-Silverman’s own upbringing which was surrounded by a “mixture of hippies… rednecks and all the other weird people who wash up in a weird place”, the film incorporates these colorful characters into a group of siblings who want to improve the view of their father’s burial place.

“It feels important to pay homage to the original characters who are not only able to exist in the right secondary places, but who can be cherished in a way,” Walker-Silverman said. “My life has certainly been made much richer by all these sorts of weird people popping up in these places or stranding themselves there. 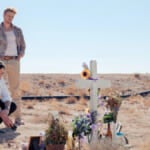 At the end of the film, Faye receives Tito’s photograph in the mail, a sign that confirms that there is a future for her and him. This tangible memory, which verifies that something very real happened in between, is a “huge step” for “a character who has avoided the photos, avoided the memories, and avoided the experience for a very long time,” according to Walker-Silverman.

As for whether the two cross paths again, Walker-Silverman said he likes to believe they’ll “be a part of each other’s lives, maybe just through letters.”

“It’s going to be a happier life than it was in the movie,” he concluded.

“A Love Song” debuts in theaters on July 29.