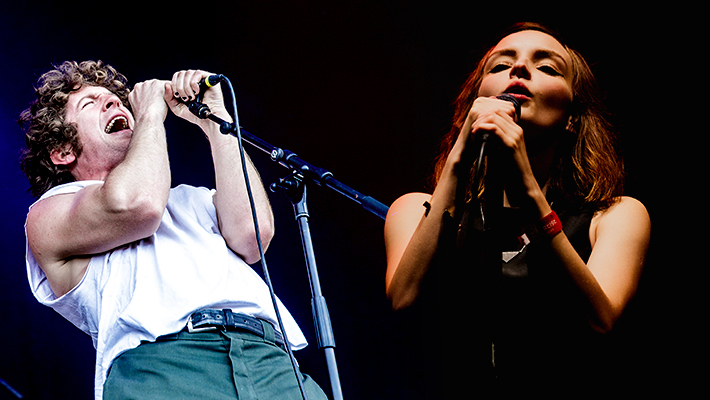 Independent music has grown to include so much. It’s not just music that comes out on independent labels, but it caters to an aesthetic that deviates from the norm and follows its own bizarre heart. It can take the form of rock, pop or folk music. In a sense, that says as much about the people who are drawn to it as it does the people who make it.

Every week Uproxx brings together the best new independent music from the past seven days. This week we had the return of My Morning Jacket, Big Red Machine’s long-awaited new album starring Taylor Swift, and a roaring and adventurous LP from the hardcore heroes Turnstile. Check out the rest of the best new indie music below.

While we’re at it, sign up for our newsletter to get the best new indie music delivered straight to your inbox, every Monday.

Big red machine – How long do you think it will last?

In their second collaborative effort under the Big Red Machine name, Aaron Dessner and Justin Vernon gathered a collective of their best musician friends (including Taylor Swift) to create a long, radical and introspective LP. In all, How long do you think it will last is “one of the most accessible and pop songs Dessner or Vernon have ever produced,” writes Steven Hyden for Uproxx.

Chvrches is certainly not the first group to make a record about the dangers of the technological age. But few bands do it too good like Chvrches on their last album Screen violence. The album is a collection of ten electro-pop gems that Rachel Brodsky calls Uproxx “some of the most eye-catching tracks in Chvrches’ career,” channeling horror films and dark imagery to illustrate the dark underbelly of connectivity. instantaneous and constant.

Turnstile’s first label, Space-time, gave us a glimpse of what the hardcore band from Baltimore was capable of, incorporating different genre elements for one of the most unique and exciting punk records in recent memory. Fast forward three years and the quintet’s last effort, Glow on, once again raised the bar. With 808s, fluid riffs and not one but two appearances of Blood Orange, Glow on is in a world apart, sound and aesthetic.

After her self-released debut album won spots on tours with Alex G, Beach Bunny and more, Indigo De Souza returned to the studio with a new sense of purpose and direction. Whatever form you take feels like a climactic moment in many ways, with De Souza fearlessly pushing the boundaries and relaying his journey of self-discovery in a direct and approachable way.

Steve Gunn – Other you

Once called “god of the independent guitar” by our own Steven Hyden, Steve Gunn is back with his sixth studio album. Other you allows Gunn to explore the full spectrum of his musical sensibility, with everything from atmospheric melodies to subdued ballads. Coming just two years after the excellent 2019 The invisible between the two, Gunn’s latest serves as a further reminder why he’s one of indie’s true power players.

Gorillaz – during this time PE

After inserting new tracks into their setlist during their 20th anniversary celebration earlier this month, Gorillaz has shared the studio releases as three tracks. during this time EP. The first track is also the title track, with Jelani Blackman with Barrington Levy, followed by “Jimmy Jimmy” with AJ Tracey, and finally a live recording of “Deja Vu” with dancehall performer Alicaì Harley.

After sharing The waterfall II last year, My Morning Jacket is back with the announcement of their eponymous ninth studio album. Along with the news of the new album, the expansive single “Regularly Scheduled Programming”, which Jim James described in a statement as a response to the overwhelming “need to help each other to awaken to true love before it happens.” either too late “.

The new album from Porches (aka Aaron Maine) has still not been expected for about a month, but the New York artist has kept rolling out music to win over fans. “Lately” is one of the simplest Maine rock tracks in recent memory, though it makes sure to get its vocals through a melodic layer of self-tuning. The new track continues to set the stage for the next Soft hold all day!, which Maine said in a statement is “injected with as much love, urgency and lust for humanity as I could.”

The Blackstarkids are awesome. In the wake of their excellent 2020 project It doesn’t matter man, the trio are now preparing their own debut album. Puppies forever still doesn’t have a release date, but “Fight Club” is another haunting track to keep us engaged. Featuring all three members exchanging worms to a homemade beat, “Fight Club” is another shining example of why Blackstarkids are a band to watch in 2021.

Phoebe Bridgers has picked all of the best and brightest indie rockers for her Saddest Factory label over the past few months. The latest addition to the list is Scruffpuppie, aka 20-year-old singer and songwriter JJ Shurbet. The announcement of Shurbet’s signing is accompanied by “Assignment Song,” a power pop barn burner that opens with a subdued solitary guitar before adding a full band to complete Shurbet’s fuzzy vocal performance.

With the new album Fun house Expected in two months, Meg Duffy shared “No Difference,” a reverb-infused folk song with a chorus reminiscent of the most melodic and harmony-focused moments of Crosby, Stills, Nash and Young’s first release. As with many of Duffy’s songs, “No Difference” has a wonderful sound frontage to disguise a track about loss, romantic longing, and childhood trauma.

Blindness of the Soul – “Third Channel”

Hudson Valley and New York rockers Soul Blind have signed with Other People Records to release new three-track EP Third channel in September. The announcement comes with the title track from the EP, a indebted ’90s alternative rocker that has it all: drawlings, distorted guitars, and punchy drums.

After making a lot of noise, Brooklyn’s band Geese officially announced their debut album, Projector, and shared the first official single “Low Era”. Where many of the group’s tracks are a bit darker and heavier, “Low Era” takes a lighter approach to a four-person dance number on the floor. “Once we stopped applying certain limits, it ended up working unexpectedly, and even ushered in that psychedelic 3D element that ends up appearing throughout the album,” said the group in a statement.

Mini trees – “Cracks in the road”

The recent signatories of Run For Cover, Mini Trees (aka Lexi Vega) are currently gearing up Always moving, their first album for the label. “Cracks In The Pavement” is a wonderful indie pop number that shows Vega’s talent for writing songs that evolve and transform through different styles and tones. According to Vega in a statement, the song’s lyrics detail “a realization that the grass isn’t always greener and that the discontent I had to deal with was internal rather than circumstantial.”

The Minneapolis Gully Boys trio cite influences like No Doubt and Hole, and you can certainly hear it on their latest track, “The Way”. With roaring vocals and an impressive modulated guitar solo that brings nostalgic ’90s grunge sounds to life for a unique, modern rocker that will make you want more Gully Boys.

With a new album Negative expected later this year, Ekkstacy has been on the rails in recent months. Each song was louder than the last, and “In Love” is no exception. Opening to a sparse, dramatic grand piano and Ekkstacy’s reverberating voice, “In Love” is a track that reflects her relationship with an ex. “It was hard to hear from her after so long so I wrote this after she told me her favorite song from me was ‘Love’,” he said in a statement. . “So this song is kind of like ‘Love part 2.'”

Witty and ironic, Annie Blackman’s last track was written after watching a documentary on simulation theory. Heavy stuff, but “Glitch” manages to pull it off seamlessly to the point that it almost feels amusing. The song is currently trending on TikTok, so hopefully Blackman will be an international megastar in the next 12 to 16 hours.

Some of the artists covered here are artists from Warner Music. Uproxx is an independent subsidiary of Warner Music Group.