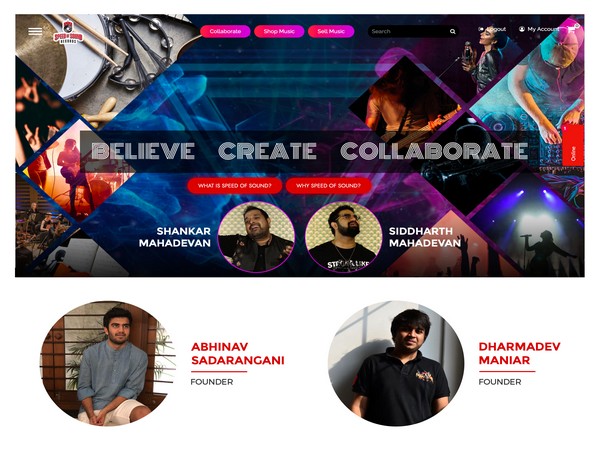 New Delhi [India], April 30 (ANI / SRV Media): The independent music industry is on the verge of another major disruption after YouTube and Spotify thanks to a new label that changes the game and allows independent artists to market their music, to collaborate and get started.

Speed â€‹â€‹of Sound Records, a label started by music lovers Abhinav Sadarangani & Dharmadev Maniar, aims to disrupt the industry by creating a dynamic and interactive platform that allows musicians to monetize their creative portfolio, get started and to collaborate with each other.

Abhinav is a graduate of the University of Exeter, UK and works in the music industry, while Dharmadev Maniar is a music composer with a BA in Music from AR Rahman Conservatory, Chennai.

Launched in India and the UK, the platform has focused on the independent music scene and generated a buzz in both countries, as evidenced by user reviews on the website.

Speaking about what inspired the duo to launch a platform like this, founder Dharmadev Maniar said, â€œThe music industry needs change, a change for the empowerment of our independent community that believes , creates and collaborates “.

In a move that can best be described as a democratization of the music industry, the label, through its platform called speedofsound.io, allows musicians to market their music as music videos, which are available for trial. and purchase. The seller decides the price and continues to own the copyright in the music through transparent and artist-friendly contracts. SOS is a member of the Indian Performing Rights Society (IPRS).

Abhinav Sadarangani, founder, describes Speed â€‹â€‹of Sound as a movement that empowers artists – “The business is for artists, by artists and with artists”.

The platform also allows people from the music and related fraternity to connect with each other and form collaborations. So if you are a music composer looking for a cellist, you can find one directly on the platform. The platform expands to include artists such as fashion designers, stylists, choreographers and more. â€œAs music composers, we are always on the lookout for new voices to work with. Speed â€‹â€‹of Sound as a platform was very necessary, “joked a regular user of the website”.

The label is also launching a selection of promising artists on more than 50 platforms to give them the visibility they need. â€œSpeed â€‹â€‹of Sound approached me with their infectious energy and belief in the potential of song. Thus, it allows me to continue my discovery of myself as an independent Indian artist, â€says Parth Zeth, one of the artists recently launched by the label.

Speed â€‹â€‹of Sound has now also entered the film industry. Artists and collaborators will be given a break and will be launched alongside established artists to create music for films. The vision is to launch and establish artists through film projects in India and abroad.

â€œFor an independent artist, having a platform like Speed â€‹â€‹of Sound that allows them to express themselves in this way is really important. This was not the case 5-7 years ago but Speed â€‹â€‹of Sound is changing times. This platform will help us to recommend new talents, I would like to work with them and collaborate on future projects â€, says Siddharth Mahadevan.

This story is provided by SRV Media. ANI will not be responsible for the content of this article in any way. (ANI / SRV Media)

This story is automatically generated from a syndicated feed. ThePrint is not responsible for its content.

India is all the more in need of free, fair, uninhibited and questioning journalism as it is facing multiple crises.

But the news media are in a crisis of their own. There have been brutal layoffs and pay cuts. The best of journalism is shrinking, giving in to crass spectacle in prime time.

ThePrint employs the best young reporters, columnists and editors. To maintain journalism of this quality, it takes smart, thoughtful people like you to pay the price. Whether you live in India or abroad, you can do it here.