The festival takes place from Thursday February 11 to Saturday February 13. Festival tickets are $10, and a portion of proceeds benefit Made In Her Image, a non-profit organization dedicated to giving girls and women the opportunity to learn and break into the entertainment industry.

The Arizona-based musicians who make up The Color 8 explore the frustrations felt by their generation in the context of the shared history of black people living in a racist society. The clip was directed by Chuck Sterling, who studied film and media production at ASU.

The animated video featuring AJJ’s folk-punk music uses shifting characters and shifting imagery to convey a myriad of illnesses marked by angst, isolation and self-doubt. The music video for the group, which formed in Phoenix in 2004, was directed by Los Angeles-based filmmaker Jed Rosenberg, who says he takes a DIY approach to his craft.

Set in a dystopian future, this music video explores issues of control and self-acceptance, using women of varying ages to convey a range of human emotions. It is directed by Spanish designer Amanda Lago, whose works span film, fashion and music.

Featuring the hip-hop duo An Illustrated Mess, this narrative piece tackles alcoholism, which the artist conceives of as a slow suicide. The music video was directed by Diedra Peaches, a Diné filmmaker and storyteller who was born and raised in Flagstaff.

“Playing with the Devil”

Five members of a pop band are taken on a surreal journey in this video that discusses how fame and money can undermine authenticity and integrity while creating one’s art. The piece was directed by Midnight Cassette singer Amy Winterbotham and French designer Peter The Moon.

Featuring an Arizona-based hip-hop group that reflects eclectic inspirations and experiences, this clip explores police brutality and racial injustice. It is directed by Mikey Campbell, an Arizona-based filmmaker.

This is the debut single from Arizona-based Las Chollas Peligrosas, whose work reflects their roots in the desert southwest. The all-female quintet performs Latin fusion music designed to share powerful stories that elevate community voices. The music video was directed by Max Anderson.

Another piece featuring Arizona-based talent, this music video imagines a musician who decides to lead her own musical journey after enduring misguided input from others. It is directed by Dick Dorado.

Featuring the music of Indigenous artists River Rios and Killa Maus, this piece explores issues ranging from ignorance to anger. It is directed by Arizona-based filmmaker Esteban Obregon and musician The Kaleidoscope Kid. 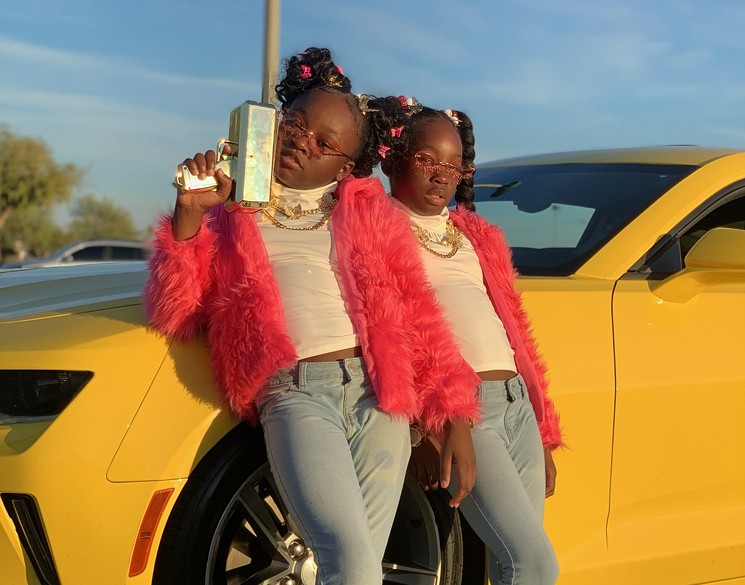 Watch a scene from the “Tippy Tippy Top” music video.

Two sisters start a lemonade stand, where they sing surrounded by friends about their goals, their plans, their love and their will as the money falls from the sky. The clip, which is drenched in bright yellow imagery, was directed by Lathenia Janae, an Arizona-based filmmaker whose work explores the African diaspora.